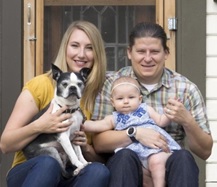 Matt grew up in a north suburb of Chicago in the Presbyterian Church. He left Illinois after graduating high school to attend college at Fort Lewis in Durango, Colorado. Post college, he served at a church plant, as well as an Episcopal church.

Matt moved to Seattle for seminary and was involved in the emerging church, and later found a home at Seattle Mennonite. He was called to be an associate pastor at Lebanon Mennonite in Oregon, where he served for the past five years before arriving in Glenwood Springs this summer.

He is a husband to Kelli, and father to Roosevelt (9 month daughter) and Benedict (14 year old Boston Terrier). Matt spends his free time reading, editing at The Other Journal, hiking, or enjoying the Cubs. He is excited to be back in Colorado and for the work God has prepared for him in Glenwood Springs. 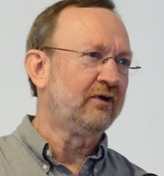 
Tom had his formative experience for the first 18 years of his life in LaGrange County, Indiana. He grew up as a Methodist in Amish and Mennonite country because his grandfather (an Amish Mennonite) was especially fond of, and married, a Methodist girl. At that time, it meant having to leave the church.

The congregation he grew up in had a history of turning out several pastors or missionaries every generation. He was one of those encouraged to consider ministry as a vocation. It took Tom several colleges to get his BA, traveling to Taylor University, Indiana University, Goshen College, and Indiana University at South Bend. He only attended one seminary—then Associated Mennonite Biblical Seminaries, now Anabaptist Mennonite Biblical Seminary.

Tom’s first pastoral experience was being the first pastor of an emerging congregation in southern Indiana. A group of family practice physicians decided to practice medicine on one of the chronically underserved areas of Indiana. They located in Paoli and were frustrated in not finding a local congregation with an Anabaptist flavor. So they were encouraged to begin their own house church, which they did. Soon they realized that, while they were trained to practice medicine, they had not been trained to start a church. So they looked to the seminary for help. They were not interested in being a traditional congregation. Tom was not interested in being a traditional pastor. That’s what brought us (along with God’s providence) together. Tom and his wife, Amy, began their family in Paoli, giving birth to their two boys and receiving their first daughter (via adoption) in that community.

Ten years later Tom was called to be the lead pastor at the Mennonite Church of Normal, Illinois. It was a dramatic change to move from a rural context to a prosperous middle class community with two universities and a multiple staff. But these, too, were wonderful years. They completed their family with a second adopted daughter.

Both of these congregations (Paoli 1977-1987 and MCN 1987-1995) were dual conference congregational experiences. Tom found himself immersed in both “families” of Mennonites preceding the ultimate union of the General Conference and the Mennonite Church.

After 18 years of pastoral experience, Tom had a good idea of the kind of conference resourcing that would benefit congregational pastors. When he had the opportunity to become part of the new conference structure that emphasized resourcing pastors and congregations in Ohio Conference, he welcomed the chance to participate in this new venture. Since his wife (as a Nurse Practitioner in Women’s Health) had always had to find her job after Tom was called to a pastoral assignment, he let her find her job (since he could locate anywhere in the state of Ohio) to determine where we might live. Tom began as one of the three regional pastors who gave direct services to pastors and congregations. But about two years later the conference minister resigned to take another assignment and Tom was called to fill that role. It was more administrative, but still had some direct contact with pastors and congregations. Tom served in Ohio from 1995 to 2015.

Tom has always thought of himself more as a congregational pastor than as a church bureaucrat. So he is glad to have the opportunity to resume pastoral ministry, this time as a transitional pastor, with the wonder folks in Albuquerque.

Tom looks forward to becoming better acquainted with the congregation and the Mountain States Mennonite Conference! 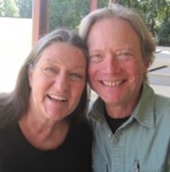 After his family returned from MCC service in Canada and the US in 1998, Rob served the Ohio Conference of the Mennonite Church USA initially as a consultant in dealing with church conflict. After several years in that role, he was called to the pastorate as an interim pastor and in this role, Rob began to incorporate his experience as a mediator and facilitator into his pastoral duties. His first pastoral assignments were on a part-time basis while he was holding the position as the Director of The Center for Restorative Justice of North Central Ohio (offices in Akron and Wooster, Ohio).

Rob said, “I have found each one of my transitional callings to be an exciting and invigorating time for the church involved and for me. This interim time offers the chance to reflect on who we are and where God is calling us at this time. I understand the church as an institution of change. As the body of Christ, we are reborn into new life meeting Christ and, we are called as the body of Christ to bring life-giving change to the lives of those who have yet to experience the resurrected Christ. As Christ continually changes his context, so, too, the body of Christ is changed through the years by significant events which include pastoral transitions. The time of transition can be likened to the Israelite’s wilderness experience, where the Israelites came out of Egypt, yet were not settled in the Promised Land.”

Rob is married to Patty, a retired professor from the Ohio State University. They have five married children and ten grandchildren.