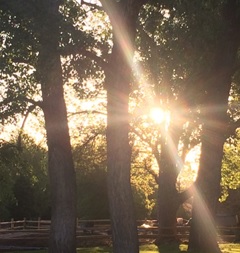 On May 14, John Franz shared the following reflection with us at Glennon Heights Mennonite Church. Assuming that there are other congregations in our Conference who are also struggling with being faithful followers of Jesus in community with those who have differing political perspectives, we share John’s reflection with you.

Back in January, immediately following the inauguration of President Donald Trump, I stood up during Joys and Concerns to lament the state of the world as I saw it. The course of political events in the United States leading up to this inauguration struck me, not as a “normal” election in which my favored candidate did not win, but rather as a seismic shift in the social fabric of this country, where I have been fortunate to live as a guest for more than 20 years.

In other words, this last US election cycle, when taken together with political developments elsewhere in the Western world such as the Brexit vote in England and the emergence of actively authoritarian governments in Hungary and Turkey, seemed to echo the first stages of Europe’s descent into Fascism in the years following the First World War. In that earlier era, the United States was instrumental in opposing those forces of darkness. What would become of the world if the US abandons its founding principles now?

My thoughts apparently resonated with many in this congregation, and some of us subsequently met in a series of “Faithful Response” meetings to process our distress. It seems that the four gatherings we had have been largely positive for those who participated. For myself, here are some things I learned:
1) I was probably going through the stages of grief, starting with denial followed closely by anger. I felt the outcome of the election as an existential threat, but this was not a rational response. This is not to say that all of my concerns have been alleviated, but my outlook has shifted to a more balanced perspective.
2) I became aware that not every Republican voter supports every aspect of Donald Trump’s worldview. For example, many who voted for Mr. Trump may have been specifically interested in such things as …
• legal protections for the unborn
• reducing government regulation that inhibits productive economic activity-controlling the growth of unsustainable entitlements that contribute to an every-expanding federal debt.
In other words, they had principled reasons that come from a “good people” perspective, as Pastor Betsy put it.
3) I realized that there is a substantial portion of American society that legitimately feels hopeless and disenfranchised. Economic shifts, some due to globalization but also due to automation, have displaced many working-class folks whose industrial jobs once gave them a foothold in the middle class. These shifts have particularly affected working-age men without a college education. Even though I may not personally be affected by these changes, I at least owe those who are affected by them my understanding and compassion.
4) It occurred to me that our Faithful Response discussions might be interpreted as a sign of disrespect to those among us who have a different perspective. I thought, for example, about how it would have felt if a group within this congregation would have convened a series of “What do we do now?” meetings in the wake of the 2008 or 2012 presidential elections.

If any of you have felt marginalized or judged by my words or actions, I want to take this opportunity to ask your forgiveness. My objective in all of this has always been to discern God’s purpose for my life in this stormy time. None of us have a monopoly on the truth, and I believe there is great strength in sharing thoughts in community. I invite any and all of you into ongoing conversation about the work God is calling us to do in the building of God’s Kingdom.
5) Lastly, I was again reminded that God does not call on us to “succeed” in the human sense. In other words, God’s perspective is not limited to getting our candidate elected this time around, or to the passage of this or that bill in Congress or the appointment of this or that individual to the Supreme Court. Indeed, throughout history, those who sought to exercise their Christian conscience have probably more often found themselves at odds with the prevailing powers than working in concert with them. If nothing else, recent events have inspired many of us to shake of our complacency and look for new ways to live out our beliefs in this world.

Attendance was down at our Faithful Response meeting last Sunday, which we took as a sign that our original purpose has probably been fulfilled. While we don’t anticipate any more regular meetings of this group, it is possible that some of the themes that came up in our discussions may be carried on in future adult Sunday School sessions. If so, be assured that the purpose will not be to change anyone’s fundamental values, but to help us collectively seek out God’s will; let’s keep talking to each other, let’s keep working together.

Grace and peace to you, my sisters and brothers.