Building a Bridge Across Borders

Inspired by a call for relationship, an MSMC delegation and Mexico City’s congregations begin a voyage of friendship and mutual support 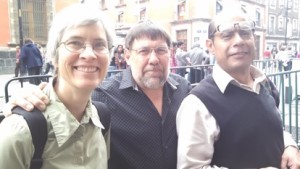 Earlier this year, Fernando Perez Ventura and Rebeca G. Torres were part of a group of CIEAMM leaders who had initiated contact with the North American conferences in Mennonite Church USA with a letter. They later traveled to the United States and visited Colorado, New Mexico and the Mennonite World Conference in Pennsylvania. Out of their trip and with the backing of their colleagues and expressed interest from MSMC, came the proposal and an invitation to Colorado and New Mexico Mennonites to initiate a fraternal relationship and visit several churches in Mexico City.

Nick and Ronda King of Carlsbad Mennonite Church led the group during the 10-day trip, and drew on their half of a decade representing Mennonite Central Committee U.S. as country representatives in the capital city to re-establish connections with the 10+ congregations of CIEAMM as well as forge new relationships. 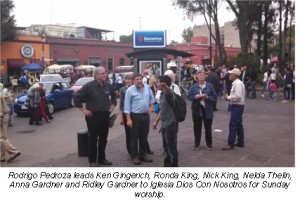 Trip participants included Deb Schaffer of First Mennonite of Denver and Nelda Thelin of Emmanuel Mennonite Church of La Junta, Colo. (Thelin also serves on the MSMC leadership board); Anna and Ridley Gardner of the Carlsbad church; and Neal Anderson and Ken Gingerich of Albuquerque Mennonite Church. Mennonite Mission Network’s Linda Shelly, who heads up the organization’s Latin America programs, was on hand to offer guidance and support, and her invaluable language skills as an interpreter and liaison. 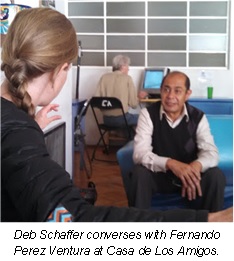 Learning about culture, history and food
Exploring the region in and around the federal district included visits to Teotihuacan (site of two pre-Aztec pyramids), the artistic and historic barrio of Coyoacan, El Palacio Nacional and its famed murals by Diego Rivera and the ruins of the Templo Mayor and its museum near the Zocalo, the historic plaza of the capital. Day of the Dead customs also gave the delegation a taste of the colorful and multilayered traditions celebrated there.

The warm hospitality extended by the Anabaptist congregations in Mexico City included many fellowship meals at the churches as well as a home concert. 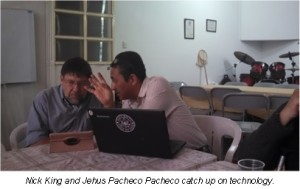 On the move
Based out of a Quaker-run hostel, the MSMC group navigated the city by metro, bus, train and foot to visit the many churches in the vast metropolitan area for worship and fellowship on two Sundays and during the week.

The experiences proved invaluable to learning about CIEAMM’s commitment to Anabaptism in an urban context. Many of the congregations’ services are led by younger people and female leaders, feature worship with contemporary music, and are led in working-class neighborhoods. Due to the nation’s economic realities, laws and history, the pastoral leaders also hold several jobs – nevertheless, they dedicate a large amount of their time to guiding their congregations. Efforts by the churches include offering day care and early childhood education, entrepreneurial endeavors and theological training and experience to its younger members.

Visits to the offices of Serapaz, a human rights organization, and Mennonite Central Committee deepened MSMC tour participants’ understanding of the region’s many socioeconomic issues, including immigration and human rights violations.

A daylong visit to Toluca, a city outside of Mexico City, highlighted how the middle-class members of a fellowship there are committed to helping the young residents of a lower-income area with music instruction, Scriptural lessons and art activities. This outreach is offered at a neighborhood center which also serves as their house of worship. The working members of the community there are also learning new ways to do their brick-making work with more sustainable techniques. 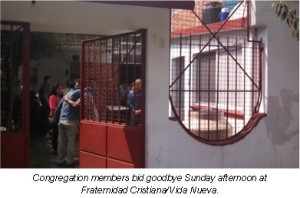 Discussion of how the two conferences will build an equal partnership included two meetings between the North American delegation and the Mexico City church leaders at the beginning and end of the visit. Throughout the visit, the MSMC delegation thoughtfully reflected on how to best approach to cultivate the possibilities and maintain a spirit of equality and respect.

“It was truly an eye-opening and fantastic experience,” said Ken Gingerich. “We look forward to seeing how our relationship (between CIEAMM and MSMC) can evolve and flourish.”