[Excerpts from Mike’s blog at http://rawtools.org/blog/]

It was my first time visiting Washington, D.C.  RAWtools had been there three years ago at the National Cathedral with the Children’s Defense Fund, but my son was about to be born so I gladly missed that one.  This time we were invited by my friend, Shane Claiborne, to be a part of a Death Penalty abolition event in partnership with Abolitionist Action Committee.   On Monday January 16, we accompanied an evening program hearing from “Voices of Experience” with various connections to the death penalty. 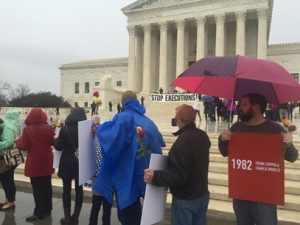 On January 17 many in attendance and others joined for an action at the Supreme Court.  Eighteen ended up risking and being arrested for peaceful protest – they held a sign on the step of the Supreme Court that read, “STOP EXECUTIONS.” Those not risking arrest (about 100) stood on the sidewalk with signs for each year since the death penalty was reinstated with the names of those executed that year.  I held the year I was born.

Why the connection to the death penalty?  One reason is the 40th anniversary of the execution by firing squad of Gary Gillmore, something he volunteered for.  We made a garden tool from a gun similar to that used in Gillmore’s execution.  The tool was given to Randy Gardner, whose brother was executed in 2010, also by firing squad.

The second leg of our trip took us to Penn State as part of their MLK week events with various student organizations, including 3rd Way Collective-whom we have worked with in the past.  We had an afternoon gun to garden tool demonstration that was followed by a talk from Dr. Drew Hart on systemic racism that flows in our institutionalized churches.

Dr. Hart closed with a phrase he’s coined, “counter intuitive solidarity.”  He tells us about a tangible way forward.  White people came to the US and started a country by stealing it from the natives and building it with the bodies of African slaves.  We are not far from the civil rights era.  We can talk to people that felt it.  And more importantly, privileged people need to pursue solidarity with those not like us.  At times it will feel counter intuitive to a life built on privilege.  It will feel counterproductive to talk to fellow white people, in a white community, about race.  But as Drew says, “That’s where all the action is!”  I love a story he tells in his book Trouble I’ve Seen: Changing the Way the Church Views Racism.  Drew is having lunch with a white friend who all of a sudden thinks of a metaphor to navigate the space of race.  He places his cup between them and explains that they both see the cup, but they can’t see each other’s side, so they need each other to share their perspective.  Drew then explains that as a minority, he already knows what the other side looks like.  He’s had to navigate white space his entire life.  He was the only black male on his dorm floor in college – he lived the other side of the cup.   A white person can go through life and know nothing about African American culture, but minorities have to learn another culture in order to survive.  This doesn’t make a white majority inherently bad or evil, but it does make it easy for a system to be established that does not foster relationship between people groups.  If you want to learn more about this, study how long money travels in white communities in your city vs. how long it travels in the minority communities in your city.

Read more of Mike’s reflections about the trip to Washington DC at http://rawtools.org/blog/.

Author Drew Hart will be in Colorado April 29 for the Mountain States Mennonite Conference Faith and Life Forum at Beth-El Mennonite Church.