In the Shadow of the Cross: A Good Friday Service of Tenebrae

On Christmas Eve and Good Friday, Cheraw United Methodist and East Holbrook Mennonite Churches combine for joint community worship services; Good Friday 2016 was East Holbrook’s turn to host the service.  Pastors Susie Burley (CUMC) and Brian Hanneken (EHMC) were of one mind on this year’s collaboration, being moved to present a remembrance of Christ’s last hours in a way that would invoke the depth of the darkness and despair of that day. Drawing on over a millennium of church tradition, we planned a stark and simple service of Tenebrae based upon the last seven sayings Christ spoke from the cross. 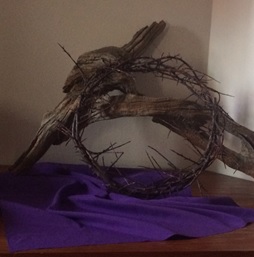 “Tenebrae” is the Latin word meaning “shadows,” and Tenebrae worship tells in experiential form the story of Jesus’ passion. As the service unfolds, symbolic candles are extinguished and the sanctuary becomes progressively darker to depict the final hours of Jesus’ life and to dramatize the impact of his death. When seven candles – representing the seven last words of Christ spoken while on the cross – are extinguished, only the Christ Candle remains lighted. Then it too is extinguished so that we may experience the darkness and despair that fell upon the earth at the death of God’s Son and during the time he was in the tomb. There is no benediction, word of dismissal, or other conclusion to the service because until Easter Sunday there is nothing more to say. Following the service, worshipers leave the sanctuary in silence.

Worshippers entered a darkened sanctuary: the windows were covered, and the primary light source was eight candles burning on the sanctuary table. Following words of greeting, an introduction to Tenebrae worship, and an opening prayer “Were You There” was sung as a slow lament. Then the seven last words (Lk 23.33-38; Lk 23.39-43; Jn 19.23-27; Mt 27.45,46; Jn 19.28,29; Jn 19.30; Lk 23.44-46) were read solemnly and without comment, to allow the Scripture to speak for itself. Following each reading, progressively longer periods of silence were held for reflection and prayer. The corresponding candle was extinguished and the worshippers responded in unison with the Kyrie eleison (“Lord, have mercy. Christ, have mercy. Lord, have mercy.”). After the seventh word, a bell slowly tolled the ninth hour when Christ died; a loudly slammed door symbolized the earthquake and chaos that occurred when Jesus died, and the stone rolling closed on the tomb. With the pronouncement “It is finished,” the Christ candle was extinguished and all left in the dark silence.

Subsequent feedback indicates that while “different,” the evening was a good and positive experience for the worshippers. It was supposed to provide the dark background for the joy and light of Resurrection Sunday – and in this we feel some degree of success. Attendance was reduced by a threat of severe winter weather that ultimately closed highways and airports, but “…where two or three [or twenty-five or thirty?] are gathered in my name, I am there among them,” (Mt 18.20). It was a blessed time, and thanks be to God.