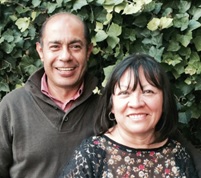 Rebeca Torres and Fernando Pérez felt God was calling them to something new, and it was time to open spaces for younger leadership. They had co-pastored the Seguidores de Cristo (Followers of Christ) Mennonite Church for 17 years, Fernando was the conference moderator and Rebeca coordinated the Latin American Anabaptist Women doing Theology group in Mexico City. They encouraged new leadership and by December 2015 made healthy transitions. The Conferencia de Iglesias Evangélicas Anabautistas Menonitas de México (CIEAMM) affirmed and blessed their call.

The Seminario Bíblico Menonita de Colombia is in a transition and Mennonite Mission Network facilitated sending Rebeca and Fernando to Colombia on a three-month assignment in January. They are working with the board in bringing administration up-to-date, reviewing syllabi, teaching courses and helping with planning processes.

Beginning in mid-April, Rebecca and Fernando will arrive in Denver for an initial six-month service sabbatical at Casa de Paz. Their sponsoring congregation is Beloved Community Mennonite Church, Littleton. Funding and coordination will come from Beloved Community, the SEED Project, “The World is My Community” fund, and Mennonite Mission Network.

Their primary role will be as host couple at Casa de Paz, which serves the families torn apart by immigrant detention at GEO Ice Processing Center. They will be in close community with Volleyball Latino (the league which raises funds for the Casa).  They will also have a guest presence at Iglesia El Centro in Colo. Springs and connect to Beloved Community church. In the process they hope to hone their English language skills.

The Mountain States/Mexico City exchange grows out of an invitation nearly two years ago from CIEAMM to US Mennonite conferences to engage in a “mutually respectful” relationship —MSMC conference responded and since then representatives from the two conferences have begun to get acquainted.

Former conference leaders Herm Weaver and Jaime Lazaro spent a week in Mexico City in the fall of 2014. They were warmly received and plans for creating a new relationship solidified.

Fernando and Rebecca’s arrival will mark a new stage in the growing relationship. They also hope to spend some of their weekends visiting congregations around the conference, getting acquainted and sharing the CIEAMM story.

There are a many reasons for pursuing this new relationship.
•We have a LOT to learn from brothers and sisters in Mexico City. There is an exuberance and sense of compassion and optimism among their congregations despite their small size.
•We have a common cultural history. At one point in history, Mexican territory extended as far north as the Arkansas River.
•We live in an era of xenophobia and fear of the “other”, especially of immigrants from Mexico and Central America. We can demonstrate a more positive way of responding to immigration issues by learning to know each other as beloved children of God.
•This is a new way to partner with and strengthen our connection to Mennonite Mission Network. Linda Shelly’s thoughtful advice and leadership is helping create a positive experience on all sides.

More exchange opportunities lie on the horizon:
CIEAMM has invited a Mountain States delegation to attend their conference assembly in September. Consider the possibility.