Section of Spruce Tree Sprouted In 1717 On Display

A new piece of RMMC’s natural history has been added to the Nature Center. Ivan White (Hesston, KS) helped preserve a 5” thick by nearly 30” diameter cross-section from the largest Engelmann Spruce tree cut at camp in the past three summers as part of the spruce beetle mitigation efforts. The tree was 110 feet tall and was located between the camp road and Four Mile Creek, near the campground.

Ivan shares this about preserving the tree slab: “Since it was still green, the partly already split slab was double-wrapped with garbage bags and then soaked on both sides with 1 gallon of 100% alcohol to help drive out the water. Two grooves were cut around the perimeter with heavy wires and “screen door” tighteners to give added stability. The slab was sanded flat through Kropf Lumber’s 30 inch sander by Fred Weir and CEO, Ken Kropf, kindly said, “No charge!”. Hours of final sanding and finishing revealed the 211 yearly rings on the slab which would have been up the main trunk around 8 or so feet from the ground. It likely took nearly 90+ years before this slab started growing which means the tree could actually be 300 years old starting from 1717– What a surprising history record!” 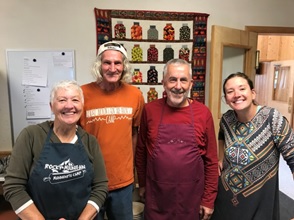 Camp received a wonderful response to the plea for volunteer help that was announced last month. It is encouraging to have many willing people offer their time to RMMC. Each weekend had sufficient help from both season volunteers and new faces to kitchen work! Thank you, thank you, thank you!

There are still a few days where kitchen volunteers are still needed. On Thursday, November 2 and Friday, November 3 there are two volunteers (out of four) needed to help in the kitchen to serve the Fall Mennonite Quilters Retreat. If you can help, please contact camp (call 719-687-9506, email info@rmmc.org, or go online to SignUp Genius).

Orv and Cleta Gingerich reached out to RMMC when they heard the need for more volunteers. As a result, they have joined in the fun at camp and are volunteering through the end of November this year. Orv served as the program director of RMMC from 1974-1980. Cleta worked in the kitchen and housekeeping. While on staff, their two daughters enjoyed having camp as their home. Their house was the Nature Center, then known as Alpenhaus! Orv and Cleta bring with them, not only their willingness to do whatever tasks are needed, but a wealth of knowledge about the history of camp. It’s enjoyable to hear their stories and reminisce with them about camp life in the 70’s. If you come to camp in the next two months, be sure to say hello to the Gingerich’s.

Pictured: Cleta Gingerich, Dale Cook, Orv Gingerich, and Chelsey Miller volunteer in the kitchen during a weekend retreat this September.

Come Volunteer
There are always projects to complete here at camp that need volunteer hands. If you have interest in helping out, give us a call, send us an email, or check out SignUp Genius website to see where you can fit in. 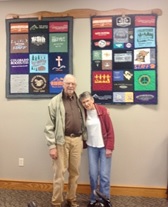 We spotted Spike and Gloria Hostetler (Anthony, KS) with many of their RMMC shirts. Their daughter, Lisa Longacher, shared this about the quilts: “When my parents decided they were no longer able to volunteer at camp, they boxed up years’ worth of t-shirts and asked me to give them back to camp. I wanted to make something special for them so I didn’t listen to my dad! Instead, I cut up the t-shirts and sewed them into blankets for them for Christmas. I told them to use them and remember all their good times at camp. They were on display at Pleasant Valley Mennonite so they could share with their church family.”

Thanks, Spike and Gloria, for sharing your time, love, and energy with RMMC which earned you all of those shirts (and so much more!). Share your “spotted” photo with us. Email it to jenelle@rmmc.org.