On A Holy Morning 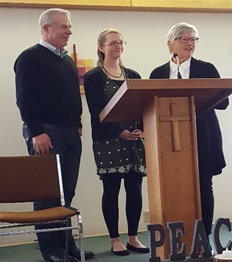 February 19 was a special morning service at Mountain Community Mennonite Church (MCMC) in Palmer Lake. Chairs were filled more than usual for two anticipated events. Amy Zimbelman, co-pastor at MCMC was licensed by Linford and Mary Etta King. Amy has been serving as Co-Pastor along with Pastor Paul Johnson since 2016.

The first step in becoming ordained is to first be licensed. MCMC is very happy and privileged to have Amy and her husband Matt at the church. Amy brings a truly heartfelt ministry to MCMC. This was an exciting and moving moment for this small valley church.

MCMC also had a special guest speaker on the 19th. Rwanda is a very long way away from the United States. So are the atrocities the Tutsis have experienced. We learn about such things through writing, news reporting or firsthand storytelling. This is what MCMC heard on Sunday morning. The heart wrenching events were told in painful detail by Elise Umuhaza Ngenzi and interpreted by her daughter Tina Ndushabandi. Elise survived two horrific murderous genocide attacks losing her first husband in the 1994 attack and her second husband in the 2009 attack. Her tale of both physical and emotional pain was hard to fathom.  Through it all she praises God for being with her and helping her and her children to survive.

Elise works with Amy Zimbelman in Amy’s “other job” of helping to resettle refugees. Elise was herself a refugee in 2010 when she was able to come to the US and leave the killings behind her. She will always bear the scars and the memories but is so grateful to be in this county. Her children are grown and prosperous. She helps others make transitions from horrible pasts.

Elise had only recently shared her story with Amy as they worked together. Amy says she felt like she was “on hallowed ground” as she heard Elise’s plight for the first time.  She wanted to have her share it with others. The story speaks for itself: http://mcmcpl.org (Click on “2-19-17 Elise and Tina” to hear her story).