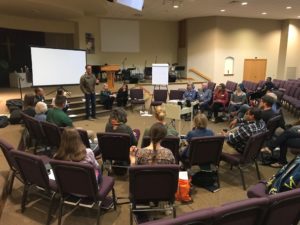 On Friday, September 29, a group gathered at Beth-El Mennonite Church for a weekend conference of worship, contemplation, education, and action. Entitled Re-Placing Ourselves: Becoming Watershed Discipleship Communities, the event served to reorient us as place-based people and mobilize us as people of faith seeking to follow Jesus in our modern context. Todd Wynward, Conference Minister for Watershed Discipleship and author of the book Rewilding the Way: Break Free to Follow an Untamed God, served as keynote speaker for the weekend.

In the spirit of the subject matter, we felt it was crucial to source the event food as sustainably as possible. We purchased locally grown produce from Windy Acres Farm in Colorado Springs and incorporated reclaimed produce from Mountain Mama Natural Foods, thereby reducing food waste. The meals were also supplemented with local backyard produce, including kale, eggs, honey, cucumbers, turnips, celery, and squash, which were donated by conference attendees. The meals served at the event were vegetarian and heavily plant-based, which further reduces environmental impact.

Todd is undoubtedly a gifted educator and an inspiring speaker. But much more than that, he is a skilled influencer, motivator, and igniter. More than once throughout the weekend, I was struck by his ability to sense the needs of the group. It was clear that his role was not to keep us happy and comfortable, but to move us toward real action. Where a less effective leader would have patted us on the back for showing up, Todd challenged us and disturbed our complacency. Without his influence, we may very well have left that space feeling good about ourselves, but no closer to authentic, lasting change. Instead, with Todd’s encouragement, the group made plans during the Saturday evening session (“Sharing Our Visions to Move Toward Action”) to form a coalition for connecting with southern Colorado farmers and purchasing locally grown food in bulk. Additional ideas under consideration include churchwide water filtration systems (to respond to contamination crises) and the Bioregional Food Covenant (a commitment to source 75 percent of one’s food from within 100 miles by the year 2025).

The inspiration for this event began in February 2016, when a Beth-El Sunday School class read and discussed Rewilding the Way together. Out of that class, a small group formed and continued to meet monthly during the Sunday School hour to seek further ways to embody the message of Rewilding the Way and undertake collective earth-protecting actions as a church body. Knowing Todd’s gifts for inspiring and igniting collaborative action, we decided a weekend conference with Todd was an ideal way to build capacity within our church and move us toward concrete practices and long-term changes. A similar event took place at Albuquerque Mennonite Church in April 2014, giving us a starting framework from which to build the programming. We highly encourage other congregations to consider undertaking their own place-based creation care workshops and explore the possibilities for groundbreaking actions in the way of Jesus.