What Can We Do Now?

By Katie Cunningham, Spiritual Director, Albuquerque Mennonite Church and member of the MSMC Ministerial Council and Leadership Board 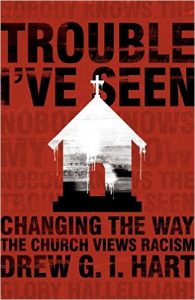 In his recent book, The Trouble I’ve Seen: Changing the Way the Church Views Racism, Dr. Drew G. I. Hart challenges the church to move beyond “Color Blindness” of individuals and learn to understand how systemic racism has and is shaping how we believe and live our lives as Christians today.

At the Mountain States Conference Faith and Life Forum on April 29, Drew shared from his own life experience as a young black man growing up in Norristown, PA, going to a suburban Philadelphia High School and attending a Christian college.  It became very clear to him that blacks and white are not on equal footing. He is currently a Theology professor, married to Renee and father of three young boys and has done a lot of research on racism.

While his talk was based on his experience as an African American immersed in white culture, much of what he said could also likely describe the experience of growing up Native American, Hispanic, Asian, African, or Arabic in our country. Women and Gay/Lesbian persons would resonate with systemic inequality as well. I think his talk was particularly poignant as we deal with immigrant families facing deportation in Mountain States Mennonite Conference.

Drew identified several barriers to communication between blacks and whites.
1.    The fallacies of the Cross cultural exchange paradigm.  “Sweet Tea story”
As a child Drew lived in a multicultural environment, but he still had to learn to navigate the white culture as it was the dominant culture. History and Literature were taught with a Eurocentric perspective.  He noted that white people can go their whole lives without having to learn how to get along in black culture, but black people in America do not have that choice.
In grade school Drew lived in the multicultural environment and did not feel that “different”.  However, when he was one of only a few blacks in his suburban high school and Christian college, he realized that people were fearful of him, due to his skin color. Or they idolized him as a star athlete and saw him an “exception” to the African American Community as large. While the whites in this case described themselves as “color blind”, that only seemed to apply to him.
2.    Racial Hierarchy which is embedded in society.
He believes that white people unconsciously evaluate everyone according to white Eurocentric standards of worth, beauty and goodness and described the “Clark doll experiment”.  While these attitudes may be unconscious, white exceptionalism and anti-Black views are fixed and normative racial frameworks in our society. Whiteness is not just about skin color.  It is a way of being in the world. Embracing diversity is beautiful.  But “colorblindness” is a problem when it is used to shut down communication.
3.    Confusing definitions of racism.
English Dictionary definition – hatred of one race for another; prejudiced/biased – a matter of the heart. This can apply to both individuals and communities.
Sociological definitions:  “a humanly constructed system that socializes people into their racial identities, biases and practices, and it organizes our society by race in a way that structurally justified advantaging white people for social dominance”.
Not only slavery, but class system and unequal opportunities.  For instance, African Americans were not eligible for acquiring land in the early 1800’s in the government Homestead Act, because they were deemed as ineligible for citizenship because they were not born here.  They could not attend white schools, colleges, etc.
4.     Mennonites have emphasized separateness for the sake of holiness
Mennonites indirectly have pitted the church against the world. They are historically highly sensitive to non-conformity. From 1918 – 1943 they were also racially separate as pacifists. Peacemaking is more than non-resistance. It is moving toward shalom for all.

What can we do now?
1.    Stop playing the “whiteness” game. Live justly. Resist racial hierarchy and power dynamics.
2.    Share stories / allow others to share their stories.
3.    Read black history and black literature. We cannot live justly, without historical knowledge.
4.    Be faithful with your body. Show up and stand up when black people are being oppressed.
5.    Don’t shield white children from the ugliness of racism in the past.  Sing freedom songs, tell Bible stories, be aware of multiculturalism in your choice of books to read to them.
6.    Seriously study the life of Jesus and the prophets. Jesus brought radical disruption to a violent and unjust world. He questioned the status quo. He became angry with injustice.
7.    Treat all God’s children like brothers and sisters, despite what you are “allowed to do”.

Final challenge for churches:
What is the story of the place we inhabit?
Who was decimated or displaced here?
What are the stories?
How do we walk alongside these brothers and sisters as followers of Christ?