I know I’m an anomaly; I love delegate sessions. I love listening and learning from the collective wisdom of all who are passionately and deeply devoted to our conference. Whether it is at conference assembly or national convention, delegates working together is my highlight for these gatherings. And honestly, I was a little worried about how delegate session would go virtually. Would people show up? Is Zoom really a platform which allows for everyone’s voice to be expressed, heard and welcomed?

I’m happy to say that my concerns were unfounded. In fact, in the survey results, one thing multiple people mentioned was how they enjoyed the virtual delegate assembly. I want to express my appreciation for everyone’s virtual presence, the discernment and the great conversation that arose during the delegate session. And good news, if you liked this format, we likely will have another virtual delegate gathering this fall.

As part of the delegate session, we had three items which we voted on. First, there was a 100% approval for Zach Martinez continuing to serve on the Leadership Board. Second, there was a 96% approval for the budget. Due to uncertainty surrounding the pandemic and the fact that 2019 shows a significant loss, the SEED budget was lessened by $10,000 for next year. This was a hard decision which was grieved. However, as was mentioned in the delegate session, we encourage individuals to donate specifically to the SEED committee, if you feel so led. A special thanks to Rita Balzer and the finance committee of MSMC for all their hard work preparing a budget for 2021. In normal times, it is incredibly difficult to project forward six months. We know how much harder this is to do during a pandemic.

Finally, Katie Cunningham, on behalf of the Ministerial Council, brought forth a proposal for a spiritual directors and pastoral counselors listing on our website. The discussion surrounding this proposal was ample. Everyone’s deep concern for the conference was clear in the discussion which emerged around liability insurance and coverage. This proposal passed with 86% approval with the stipulation that the leadership board would do further research on potential legal and liability concerns. I’m happy to say that this process is ongoing. We will present an update on this proposal at our special delegate assembly in the fall, where we will (hopefully!) affirm our next conference minister.

Also, during delegate assembly, we had an update about the conference minister search, a discussion about the newly formed RACE task force, a report from Rocky Mountain Mennonite Camp, as well as several committee reports. Finally, we showed our appreciation for Ken Gingerich who served as the moderator of our conference from 2017 – 2020. Thanks once again, Ken, for all your hard work, your devotion, your creativity and all the love you poured out while serving as moderator. As Merv Birky shared: “You have been a blessing.” We are deeply grateful for your service. 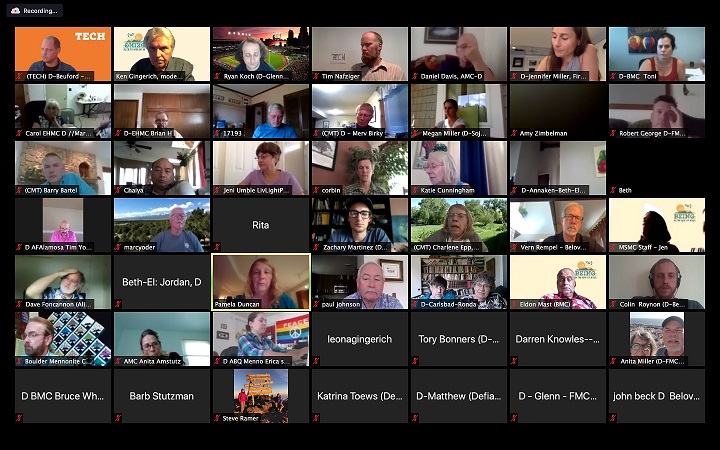